KuroNekko wrote:. I mean really, would you buy a new Mitsubishi today?

I took a look at their vehicles when I went in to pickup that o-ring for the K's CVT. Ironically, their use of CVTs was the sole reason Mitsu wasn't on my list to pursue at the time. Other than that, I found nothing wrong with the new models in the showroom I looked over. Didn't drive any either, so there's that. Had they been conventional ATs, and dealers were willing to deal on their prices and my trade, I'd have pursued Mitsu as I had Toyota, Subaru and Mazda. Admittedly, I really wasn't in to paying Toyota and Subaru prices when at the end of the day, most all new Japanese vehicles today are about the same as far as general reliability goes.

I agree with your assessment of Mitsubishi but most people avoid them or forget they even exist. Many enthusiasts have no reason to look at them anymore. They have largely survived on the current CUV trend by offering a good value CUV. While the vehicle itself is nothing special, it can be had for good prices for what you get.
As for the CVTs in Mitsubishis, they are like Nissan and Suzuki in that they favor CVTs for their autos. It's largely because these three companies are the stakeholders in JATCO. However, you can get a V6 Outlander with a conventional automatic. The problem is that powertrain is ancient and pushes the vehicle to a price point most aren't willing to pay for a Mitsubishi.

In some ways, I feel like the Outlander PHEV is to Mitsubishi what the Kizashi was to Suzuki. It was the best vehicle they made in a long time but came too late and few people care(d). The Outlander PHEV has technology beyond what most other Japanese automakers are offering and is a best-selling PHEV in a number of European countries but is selling slowly here. It's apparently picking up some momentum in Canada but nothing much in America.

Woodie wrote:Quite a few guys on GeoMetroForum bought the Mirage, a year ago you could pick one up for under $10,000. They're happy.

Again, not surprised that some Suzuki fans would go to Mitsubishi. As for the Metro, the Mirage is the closest thing you can get given it's a ultra-budget vehicle offered with 3 cylinders and a choice of either manual or auto. It's the only car I know of sold in the US that's made in Thailand.

Mitsubishi is like what Suzuki was several years ago; just blundering around and not really making products that connect with the consumer base in this country. They both resorted to being budget brands even below KIA and Hyundai when they conceded that they didn't care to be competitive. It's shocking for people who know their former or other products. Suzuki is a top name in motorcycles but their cars were an afterthought. Mitsubishi once was the most exciting Japanese automaker but now absolutely forgettable. Mitsubishi only kept alive given their focus on larger CUVs than Suzuki which are selling due to general trends. Selling the cheapest new car in America also helped though I'm sure the sales of those have cooled since gas prices came down.

Much like Suzuki, Mitsubishi has great engineers and their past products have showcased that. However, the management seems set on a business model that has made the brand nearly irrelevant. Despite SUVs and trucks gaining tremendous popularity, they refuse to bring their new Montero Sport that's being sold in Asia. Same with the Triton pick-up. Meanwhile companies like Ford are reintroducing their pick-ups and SUVs that their Asian divisions have designed. Instead, Mitsubishi gave us another compact CUV that most reviewers have written off as just ordinary at best. The Outlander PHEV is finally here but arrived already dated as it was delayed for so long.

Fortunately for me, there isn't a vehicle out there made by anyone that I really want. I guess my ideal vehicle isn't made yet. It's not a bad thing as it gives me more of a reason to keep and enjoy my Kizashi.
2011 Suzuki Kizashi Sport GTS 6MT (Black)

On a side note, I was behind what appeared to be a shiny new WRX tonight on the way home. I'll admit, I don't follow the brand, but it didn't look like any I'd seen. It could also have been owner tweaked, I wouldn't know. It had a very nice subtle exhaust note during very mild, unhurried, acceleration pulling away from me at the lights. Never saw any other view except the rear end.
Ron

Poorly. They are largely forgotten about there too. It didn't help that they had a fuel economy scandal which tanked their company value and then Nissan snapped them up. Coincidentally, it was Nissan that exposed the fuel economy scheme by Mitsubishi given Nissan was rebranding Mitsubishi kei-cars as their own. When these Nissans weren't getting the fuel economy they were rated to on paper, they looked into it and exposed the misleading method of testing Mitsubishi was employing. While it was later determined that other brands such as Suzuki and Subaru were also doing similar things, Mitsubishi is the one that got hit hard with the scandal.

Mitsubishi is nowhere near Suzuki in sales in Japan but again, Suzuki is a kei-car specialist (big market in Japan) while Mitsubishi has resorted themselves to making rather oddball or unique vehicles. At least they have more interesting vehicles in Japan such as the Delica which is like a 4x4 minivan. Some people modify them rather impressively. 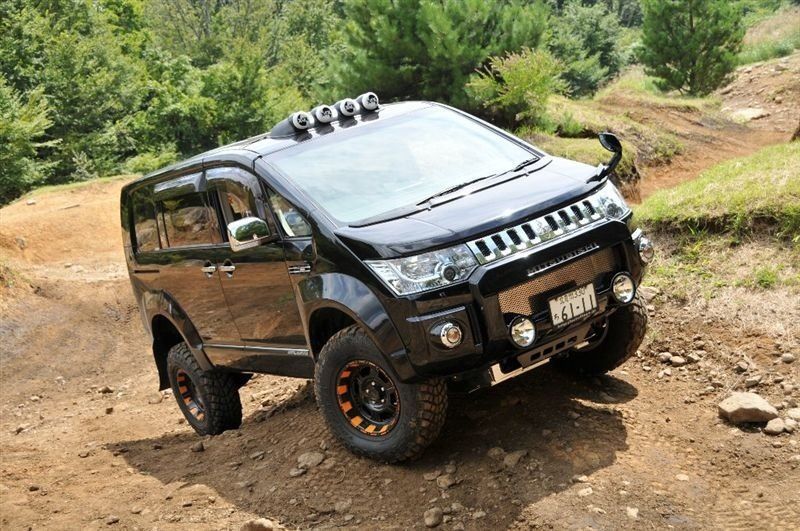 Yeah. I really wish Mitsubishi would snap out of their stupor and offer interesting and unique vehicles like the Delica. Given the rising popularity of overlander-type vehicles these days, I think they would have a following here. They apparently do in Canada where used JDM Delicas get imported.
2011 Suzuki Kizashi Sport GTS 6MT (Black)

motosonic wrote:It's sad to me that Mitsubishi is still selling cars in the U.S. and Suzuki is not. That just seems unfair. lol

Well, Suzuki has always focused on budget-minded small vehicles regardless of market which proved to be their fault in the US. Mitsubishi, on the other hand, made much higher performance vehicles and larger SUVs. While those have dissipated from their line-up, Mitsubishi managed to stay afloat largely on sales of their Outlander and Outlander Sport models which were generally larger and more contemporary than what Suzuki offered in the US in their last several years. At least Mitsubishi adapted according to changing consumer trends which helped them survive and regain sales.
2011 Suzuki Kizashi Sport GTS 6MT (Black)